We have a garage door not closing in Sparta, NJ with a photo-eye problem. When I arrived our customer was describing your typical photo-eye issue. The door would open without any issues but the garage door was not closing and they were getting a clicking noise from the motorhead. That clicking sound almost always means there is an issue with the photo eyes. I inspected the eyes and noticed that they were not lighting up. (Here is a quick video on how to align your photo-eye.) I quickly noticed some issues with the wiring right away, after cleaning it up I still did not have a light on the photo eyes. Next, I tried wiring in a new photo-eye. I still had no light after that I followed the wiring all the way back to the motorhead and noticed at the terminal into the Motorhead the wires had corroded and broke at one of the terminals. After cleaning up the wires going into the terminals we had lights on the photo eyes again and the machine began working properly.

Photo-eye issues can sometimes be a little tricky, usually, it’s just as simple as adjusting the photo eyes and making sure they are properly aligned but sometimes like in this case it requires some more digging to diagnose exactly what the problem is.

Many times problems with your photo eyes can be solved relatively easily by adjusting the eyes and making sure they are facing each other 100%. Rember to avoid keeping things in the garage right next to the eyes. There are susceptible to being kicked or bumped because of where we legally have to place them during the installation.

Some Tips
• Be aware of garbage cans placed too close to eyes
• Watch out for kid’s toys like bikes and scooters
• I have removed countless broom blocking photo eyes that are placed in front of the sensors after cleaning the garage
• Check for cobwebs and leaves and debris collecting on the eyes and hanging from the door. 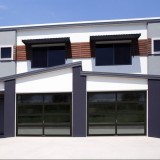